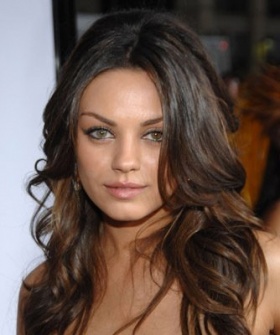 Circe would describe herself as a bitch if anyone asked. Any that return the favor gain her respect. She does have trust issues, but it is understandable. Betrayal is hated by her, loyalty is respected, and those that earn her loyalty will find it total. Circe has a fondness for guns, and puns.

Her skin brings to mind Mediterranean, Middle Eastern, or Asian races, though her high cheek bones and sharp facial structure don't match. Most assume she is of mixed ancestry given the ultra pale blonde hair and her height being 4 inches shy of 6'.

Her skin turns a slate-blue and her hair bone white. The whites of her eyes are blood red, the irises are purple with cat-slit black pupils. The helix of her ears elongate out 2" inches ending in a tip. Her features sharpen and her figure has an unnatural, inhuman litheness that can be intellectually disturbing. (Mien picture from [1])

A dry desert heat radiates off of Circe at all times.

Carmela Vincenzzo was a boney little spitfire and a serious troublemaker in New Jersey. Not that she cared, she was well connected through Family. The mafia princess did have a few normalish hobbies, which led to her getting a unique tattoo. A beautiful dark elf woman sticking out her tongue and giving the finger on her right shoulder. So that she could slide a shirt down her bony shoulder and imitate the pose, even if she lacked the curves. The biggest hobby she had however was picking pockets. Which got her caught by Maitre Comte, after picking the Keeper's pocket.

The Maitre Comte "interpreted" Carmela's tattoo of a dark elf flipping the finger to be an offer of slavery. And warped the girl to fit the image before taking her to train as a "bonus commodity" and a "lowly thief and nothing more." The Fae taskmaster intended to have the thief refined and sold. Carmela was left to Loyalists to train, rarely did she even see her Keeper. Her Loyalist trainer were harsh as expected but didn't like the elf either. Sneaking, stealing, and bribing helped lighten the load of training but her life became a pattern: train, sneak, steal, bribe, hide, repeat.

A waspish swordswoman was responsible for her and her future motley's escape. The Maitre Comte lost to the wasp, losing his composure when he snapped at the enslaved thief. The Wyrd bound Circe as long as she was called a "thief" of some sort, but the girl managed to get the Maitre Comte to call her a cannaiola. One slip of the tongue from the often competent Fae and this freed the cannaiola. Two failures so close, and both before other Fae led the Maitre Comte to throw a hissy fit. A Fae hissy fit, at a Fae party. It got powerful and destructive very fast. Dozens of Lost probably escaped in the commotion. Circe gained her first name from Artemis and Eris calling her "Cannaiola" and they helped each other esacpe.

The Lamppost is what the trio named the place where they came out in San Francisco. It was a private landmark and location known only to the 3, their beacon in the night that led them out of the thorns. She has great loyalty to her motley, the so called Rogue's Gallery.

Circe took a trip back to New Jersey, to see her family. And found she hadn't left. An older her, a Fetch, was there. She was tempted to strike it down but observation made her very wary of even trying. Cana could've tried to take its place and change her form to match her old self, but she didn't have enough of the Mirrors to do so for long. Worse, while the Fetch seeemed ignorant of its inhuman status, but that didn't make it less lethal. The mafia was proud of the Fetch: a professional killer that did them proud. Circe didn't think she'd win the fight or the war with the Family that'd come.

The Rogue's Gallery may have been forced into a motley, as had many others, but they actually got along. And had enough of Queen Anne's shit after being hung out to dry. They aired dirty laundry and may have set the San Francisco freehold into a civil war, but it covered their escape. In the process, Artemis and Eris learned what Circe's "name" at that time actually meant. They renamed her Circe.

Sacramento was safer, kinder, and better overall to San Francisco. It however wasn't far enough for safety, but Circe was already rebuilding criminal bridges burnt in their evacuation from the southwest. So Circe remained as Artemis and Eris moved to two other cities, planning to set up a trio of power bases that cooperated. They were not together but kept in contact. Circe also prefers to be between Queen Anne's turf and her Familia. Any vengeance must pass her before going after her Familia.

After a grueling duel of rock paper scissors with Donovan Ackerman, going into a second round, Circe earned the claim to the crown of Summer.

Circe foolishly attempted to flirt with Quick, who likes other men. She now takes amusement over watching other women make the same mistake as her.