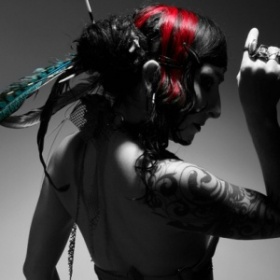 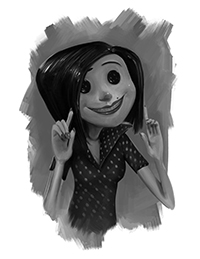 Irea stands at 5'8", her frame lithe and slim. Her eyes and hair are both a brown so dark they might as well be black, yet her skin is pale, as though she rarely sees the sun. Her movements are fluid and coordinated, her footsteps near-silent, and her stride carries her quickly across the ground. A tribal tattoo decorates her right shoulder and upper arm while another decorates her left hip.

Irea's skin is literally white, possessing no shine, as though it is simply the absence of color, a vision of flesh drowning in Moonlight. Her hair is a black so deep it seems to eat the light and khol-like rings surround her eyes and stain her lips. In darkness the blackness swallows her skin and in light the brightness highlights her form.

Irea Dimelo was born and raised in Milan, Italy, in 1985. She was the youngest daughter in a very large family and was raised primarily by her elder sisters while her parents worked obsessively in a well known but small Cuisine that they owned. Irea grew up to be an independently minded young woman, yet still with the support of her siblings at her back, who began to Dance professionally with a small company/studio based in Milan. She strongly favored fusion style belly dance, particularly using props, and traveled to perform in England, France, Sweden, Germany, and Spain with the Milanese dance company. None of these performances were of particular note but the experience broadened her world view and solidified her use of English as a second language. However, Irea's sister, Renee, was institutionalized after a manic breakdown and Irea quit the dance company to help aid her sisters recover. After all, being the eldest, Renee was more like a mother to Irea than anyone else in her life.

One night, however, while walking with Irea in the Sanatorium’s garden, Renee escaped. Only, she didn’t escape out of the Sanatorium but instead out of the walls of the world. Renee had glimpsed the True Fae making off with her child and, as some part of her broke after seeing the impossible, the other half became obsessed with finding this Other World. Somehow she had discovered a gate into the Hedge and Irea chased her sister right into faerie-land. In the midst of the hedge, during a moonlit hunt, Imrhien, the Mistress of Dark Verdance came upon the two humans and took them back to Her demesne. Imrhien was an inhumanly beautiful elfish being whose fair shoulders sported iridescent butterfly wings and great spider legs grew from her back. She was always garbed in the very most piercing gowns of green silk which would somehow obscure her form in all but moonlight. A vast expanse of twisted forests, gloom filled marshes, and moonlit meadows, all surrounded by an impenetrable wall of Thorns lay as Imrhien’s domain. Strange wolfish goblin-men, flitting moth sprites, and hundreds of insidious hobgoblins infested her realm, all eager to use the new Human Toys exactly as their Lady commanded.

Irea was already half-mad from her trip through the hedge, and the tortures she endured broke her further. She was ritually sacrificed upon an alter of desire under a starred sky and burnt in the flames of the feasting fires. Her body, still filled with life, was left to lie in the moonlight, left with the relentless pounding of drums and the shrill call of inhuman voices. When strength returned to her limbs she fled through the woods, tripping among the twisting roots and grabbing branches, being hunted by unseen spider-dryads. Their fangs pierced her flesh and their arms grabbed but she escaped into the marshes, escaped only to be swallowed by sucking mud reeking of eldritch things. She was spit back out and the cycle repeated until she learned how to hide in the dark and stalk through the rough forest floor. The moonlight revealed all in the meadow, highlighting it in stark rays of light, and Irea knew that she was safest there, safest where faerie magicks could hide no foes. Imrhien came to her then, promising her safety if she would join the sacrifice instead of becoming it. The drums beat and the Fae waited. Slowly, Irea began to dance but once she started she never stopped. She danced among the fires, through tangles of branches and verdant webs, over slim, unseen pathways over steaming mud, and always in the light of the Moon. The only light she could trust came from the moon. The stars would shift and lie, the fires held eyes, and the fey witch-lights from the marsh only beckoned her to another smothered doom. Through all the thrumming night, which eternally cloaked the land, silence became Irea’s solace and the shadows her home away from her Protectors light. It seemed as though years passed, years of hiding unseen, years of killing strange beasts and hobs for food and weapons and warmth, before the walls of Thorns opened and Imrhien left once more. Before the walls collapsed, Irea escaped unnoticed. Behind her Lady’s entourage she skulked, following her down trods and paths until she took a wrong turn and stumbled into Los Angeles. It was there the young Moonborn became reacquainted with the mortal world.

Once a year and a day had passed since her escape an agent of the Autumn court reported seeing a True Fae which matched Imrhien’s description and Rea knew that she had to leave. After all, one could not be found if one was not there. Thus, she left for the farthest and most familiar freehold she could think of: Sacramento.