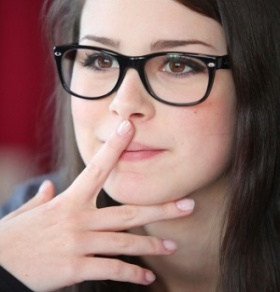 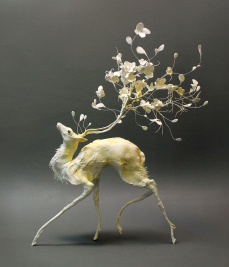 Short and petite, Evelynn is pale, with a pair of wide brown eyes hidden behind a set of very large glasses.

A thin, long-fingered woman with eyes that are impossibly large and glassy, giving her the appearance of wearing large, thick glasses when she's not. Her skin is almost translucent in its paleness, and underneath, one can sometimes see the ticking of clockwork parts.

The occasional hush falls around her - those moments of silence where surrounding conversations all lull at the same moment seem to happen more often, or perhaps the silences are just more noticeable.

Evelynn had a relatively straightforward childhood. She was born and raised in Cambridge, Mass., in a family of 2.5 kids with a white picket fence and a dog. Normal. Almost painfully so.

Evelynn was always kind of odd, preferring to take apart machines than play with dolls. Her grandfather was a watchmaker, and when he gave her a pocketwatch with a glass back, so she could see the inner workings of it, she fell in love.

As she grew older, she became very close with her grandfather, apprenticing under him at his shop. It was during this time that the Lord of Storms came. He charmed Evelynn easily with stories of coming to Europe to work on the great old clocks there. He claimed he saw talent in her, and it wasn't a lie. Despite her grandfathers protests about not really knowing who the man was, she agreed to go with him.

During her durance, Evelynn was made to build grand, intricate, dancing machines for the pleasure of her master. When she failed to please him, or when the mood simply struck him, he had Evelynn build herself a new limb, then lopped off whatever existing limb she had to force her to replace it, only to have the skin from her last "limb" stretched back over. She learned, over the years, that she was to pretend she was still whole - any mention of her severed limbs resulted in another such experience. If she was particularly naughty, she would have to replace something much more precious and painful - her ribs, her liver, her lungs...

Once, he tore out her eyes and watched, laughing, while she struggled to build herself a new pair while she was still blind.

In time, most of Evelynn came to be replaced. And in time, her machines developed into wondrous, impossible, beautiful things. They danced with gears made of mercury and pure light. Inspired by her clocks, Evelynn's greatest creation was a perfect clockwork reconstruction of a galaxy, resplendent with shimmering stars.

But the reason it was her greatest creation was because it was the reason she escaped. For it was a truly complete reproduction of a galaxy - complete with the slow, ticking passage of time that would eventually lead to the clockwork masterpiece collapsing and folding in on itself until it imploded. She explained to her master, very carefully, that each moment in her greatest work was utterly unique. It would never be seen in that particular shape again. And the Lord of Storms was taken in, smitten with the ephemeral nature of the clockwork galaxy, and refused to be denied the pleasure of seeing the entire life of it, from start to destructive finish. He demanded his entire court pay witness to the event; this most beautiful work, made all the more beautiful by its self-destruction.

As the galaxy folded in on itself, as the gears began to grind and break and the stars began to collide, the gleeful Lord paid his dear inventor no mind. And without a soul present to stop her, she simply kept walking until her feet could carry her no more.

Evelynn found herself returned, exhausted, to Chicago. She spent a few weeks there, intended to recover from her exhaustion and trauma, and then return home, but in attempting to find her family, she discovered that she'd never gone missing to begin with. She knows she should go back, tell her family the truth, but deep down, she also knows they will never accept Evelynn over the false creature that lives with them now, and she fears the rejection, deeply. Sure, she'll say that she plans to go home, that she has a good, rational reason why she's still hasn't gone, but the truth is, she's terrified of going home and having to face the reality that they didn't miss her.

So instead, she ran. After recovering in Chicago, she told herself she needed to go somewhere safe to prepare to face her Fetch. She bought a junker of an old car and drove west - as far from her family as she could - until it broke down. In Sacramento.