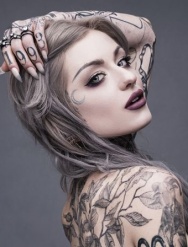 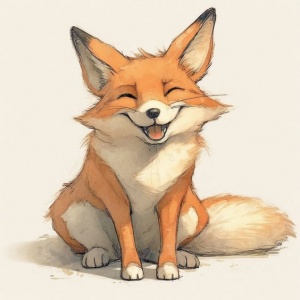 Grey-green eyes, a varied of hair colors that cycle through black, white and grey, a creamy complexion, though she's covered head to toe in tattoos.

Small void black scales accent and accentuate her form. Her hair falls in an iridescent blue cascade, the tips are a clear shinning white, while her roots are the same void black as her scales. From her spine to her tail is a trail of horn-spikes. Atop her crown grows not horns, but long, elegant antennae. Her pupils are slitted and predatory, her talons are wickedly sharp and are the same void black as her scales, and her fangs are sharp, piercing and hollow. Simply perfect for injecting her venom.

Sometimes butterflies flutter around her, which is annoying. Sometimes she eats them, other times, if they are beautiful enough, she keeps them and pins them in place.

An imitation of petals, the Norse Runes flutter and scatter in her wake. Most commonly seen are Hagalaz, Nauthiz, Tiwaz, and Ihwaz.

When Sonya Vaughn was young she was beautiful, but time and stress have taken their toll. Her children are grown, and her husband is cheating on her with the secretary, the neighbor's wife and god knows who else. On one of the nights that Sonya's husband would be out, fucking the secretary, their neighbor's wife or any fucking bitch in heat. Sonya had enough, she took herself to bar and planned to drink. Just drink until up was down and down was up.

Too many beers, and definitely too many tequila shots later, Sonya found herself necking a young stud in an alley behind the bar. Sonya was too drunk to care, maybe he just enjoyed an older women. Between bitten lips and breathless sighs, the stud whispers against her ear, "I want to hunt you down and eat you alive." Sonya's reply was stuttered out, and hard to hear, but it deffinatly wasn't a 'no'.

The Ravenous Reaver-Dragon, His Realm The Charred Bone and Meat Forest.

When Sonya was brought here, and saw the Reaver-Dragon for what he was, she realized his words were far more literal then her drunken mind realized. He told her to run, and not be caught by any but him, for he would taste her flesh, and no one else. Were she caught by the other denizens of his Realm, Bad Things would happen.

Sonya ran, the other denizens she quickly realized were just like her, named prey of the Dragon, though there was no banding together, it was every soul for themselves. No one wanted to be His next meal.

In the beginning Sonya wasn't fast enough, she was caught and devoured, her skin rending from bone, only for it to happen, again and again and again...until she wasn't herself. She's twisted her own form, strapping horn and bone and scavenged scale, upon her form -eventually such trappings were made one with her. In those early moments, for food she supped upon the things that were too toxic for anyone else to dare try....eventually that's all she ate.

Later, with her changed diet, and changed form - still changing, becoming it's own silhouette of the Dragon's just for that moment of Fear and hesitation from the others to give her the upper hand, the Reaver-Dragon himself came upon her. Snatched her away from everything she'd grown to know, and placed her in a dress.

They were going to a party, he said. It was a trap, he said. You are my best hunter, he said. We'll eat them all, he said.

There was an Auction being held by the Maitre Comte, Fae and lesser creatures would be coming from far and wide to attended, and the Reaver-Dragon would use her as his price of admission, though any fool could see where his eyes traveled. Tales of his hunger were known far and wide, though no one would believe that he would simply take instead of buy.

When the chaos of a servant's escape spiraled out of control, she and many others took that moment to reach for their own Freedom! Sonya fell into the company of a girl named Cana, and a rabbit-kin that could run like the wind, but who's ferocity was a shock, a welcome one as it turned out to be.